Over the years, and through its many “Acts”, the specific “productive” goal has changed, however, what has remained constant – with some notable exceptions – is that your work and your passions are mostly different. This has been true at least through Acts 1, 2, and 3 of work.

Work – what is it? Wikipedia defines work as:

A word embodying concepts associated with the labor, force, energy, and/or effort required to produce a specific result

This is a pretty good place to get started. When I think of work, two things come to mind:

Over the years, and through its many “Acts”, the specific “productive” goal has changed, however, what has remained constant – with some notable exceptions – is that your work and your passions are mostly different. This has been true at least through Acts 1, 2, and 3 of work.

Before we look at what work looks like in it’s “4th Act“, it is worth looking at the history of work, through Act’s 1, 2 and 3. Work has in fact been such a big part of the makeup of each of these Acts, that the very age that it describes, is named after the core “work” that people of that age had been involved in. 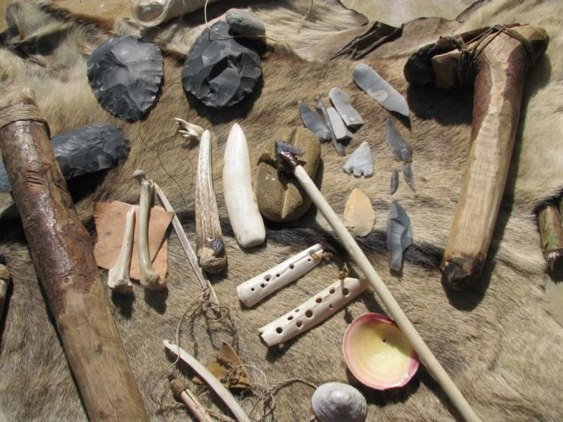 Even simple barter-based economics had not been invented yet, hence you simply couldn’t go in a local village market, and pick up a bow and arrow, or a spear, you literally had to make one. Gatherers had to know the properties of the various herbs, fruits, and vegetables that they were picking. Seemingly innocuous-looking plants could be extremely dangerous and cause death. Through the course of their lives, hunters and gatherers had to learn the habits and properties of hundreds of animals and plants, recall them from memory – written language did not appear until Sumer a little over 5,000 years ago – and often make split-second decisions on the best course of action. Critically, work in hunter-gatherer societies was and isn’t as monotonous as it became in Act 2 or in Act 3.

It is also worth considering how hunters and gatherers collaborated with each other. A typical band of hunter-gatherers was not much larger than an extended family or clan. Modern anthropologists think that the average size of a hunter-gatherer band was less than 30 to 50 people. More complex collaborative groups did not appear until the dawn of agricultural settlements in Act 2. Given the length of Act 1 (see Figure 2), it can be argued that for most of the existence of our species, our natural state of being has been in a smaller group of people than in large complex societies and organizations.

Can you even term what hunter-gatherers did as work though? As per the Wikipedia definition of work, labor, force, energy, and/or effort required to produce a specific result, hunting-gathering is/was most definitely work. However, was it the same as following one’s passions in life? It is unlikely that the passion of any group of people is the same, and if the only “work” one did was hunting and/or gathering, it is more likely than not that hunting and gathering was and is the passion of only a very small subset of people in the group.

In my opinion, though hunting and gathering goes beyond work in the classical sense. It was simply doing what needed and needs to be done – in other words, it was and is about survival at a very fundamental level!

As the ice began to melt at the end of the last Ice Age, humans invented agriculture across different parts of the planet – from Mesopotamia to China to South America to sub-Saharan Africa. As food consumption habits changed, patterns of human settlement around the world shifted – a tribe of 100 hunter-gatherers need 50 to 500 KM to survive, this dramatically reduced with the advent of agriculture. It is estimated that human population grew from six to ten million at the dawn of the Agrarian Age to 250 million by the time of the Roman Empire. These permanent settlements were at first pastoral and rural but eventually led to the formation of the world’s first great cities – from Jericho in 7000 BC (pop. 1000 to 2000) to Babylon (pop. 60,000) in 1700 BC to Alexandria in 100 BC (pop. 1M). The largest cities in the world from Alexandria on – Rome, Baghdad, Beijing all maintained a population of around 1 million inhabitants until the dawn of the Industrial Era when the world’s first metropolis’ began to emerge.

Like with hunting and gathering in the era that preceded it, the Agrarian Age was defined by the primary occupation of people of that era – agriculture. However, there were some critical differences between the two eras, particularly:

While work became more specialized, it did not necessarily mean there was a tremendous amount of freedom in pursuing one’s passion. Generations continued to do what generations before them did. Sometimes this was codified religiously, for example in the caste-system, but more often it was codified through unwritten social constructs.

Through the agrarian age, and the rise and fall of its great civilizations, the type of “work” human’s pursued did not change dramatically. This is best exemplified by the growth in human economic productivity which is pretty much a straight line up to the dawn of the Industrial Age (see figure 3).

All of this changed starting in the 1700’s. Within 200 years, the old agrarian economies of India, China, and the Middle East which, up to the advent of the Industrial Revolution combined to over 80% of the world economy in terms of GDP, were replaced by the economies of the great European powers, in particular England, France, and Prussia. The greatest economic miracle though was reserved for the New World. The United States of America, from being a non-entity at the beginning of the 18th Century, became the world’s greatest economic machine on the eve of World War 1. At the midpoint of the 20th century, 5 years after the end of World War 2, the USA comprised nearly 30% of World GDP (see Figure 4). 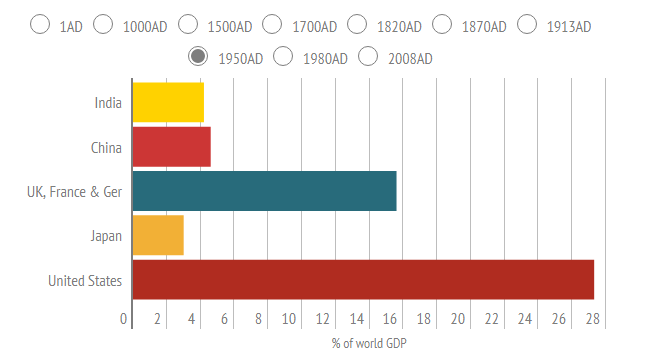 What drove this here-to unseen growth in economic productivity? Human productivity, in modern parlance, leverage, increased exponentially in this time-frame due to industry. From the Steam Engine to Electricity to the Automobile, each industrial age innovation complemented and compounded each other into driving an ever more complex and larger world economy. As this unfolded, the nature of work dramatically and decisively changed. The key highlights of this change were:

It would be hard to argue though that people’s passions drove what they worked on. Work in the industrial age was still not about one’s passion, even if it wasn’t as much about survival as before. Unlike in the Agrarian Age though, mobility between social classes, particularly from one generation to another was far greater, even if mobility within the same generation was still limited.

We are now at the precipice of the 4th Act of work. In fact, we are probably now at one of those transitory times in history where the nature of work is shifting. Where the old ways of working are changing dramatically, and new ways are being invented every day. In the past, these times have marked some of the most racist and violent periods in human history. In the next post, we will examine some of these big shifts, and what it means to our collective future.