As mentioned in our previous post, human economic productivity, or work, has been through three great Acts through the ages - the Hunter-Gatherer, the Agrarian, and the Industrial. We are now at very beginnings of what is the Fourth Great Act in this ever-evolving human economic drama - the Information Age. While Act 1 was largely about survival, Acts 2 and 3 were more about duty and responsibility. What will Act 4 of work be about? Can work finally be about passion and not simply survival or a paycheck? To answer this question we will have to examine what the Future of Work possibly holds.

In 2008, Kevin Kelly of Wired Magazine wrote a now-legendary post called "1000 True Fans". The idea shared was as simple as it was revolutionary, in that to succeed in the Information Age, one doesn't need millions of dollars, or millions of fans - you could be fairly successful with 1000 true fans. The math behind it is simple, if you can convince 1000 people to pay $100 a year or $8.33/month, for something that can be produced for 0 or close to 0 marginal cost (think almost anything digital), then you generate an income of $100,000 a year. $100,000 a year is double the gross household income of Luxembourg - the country with the world's highest median income.

At the end of 2019, Li Jin of A16Z, wrote an updated and almost equally insightful piece - "1000 True Fans? Try 100". In this piece, Li, who is an investor and board member in companies such as Substack, makes the argument that another way to get to $100,000 per year is to have 100 true-true fans, pay $1,000 a year, or $83.33 a month, for something that you can produce for 0 or close to 0 marginal cost. Li's argument for this is based on what creators are actually able to do on "Passion Economy" platforms such as Substack, Teachable etc. She doesn't necessarily argue that one monetization strategy is necessarily better or easier to achieve than the other, but that both are monetization strategies that should be given thought and consideration.

What both of these articles have in common though is the idea that we are moving into a new, creative-age of work, where creators will be rewarded for what they produce by niche audiences from around the world. A16Z very specifically refers to this type of monetization as the "Passion Economy", which stands in stark contrast to the "Gig Economy" which is largely transaction-based and does not reward outstanding performance or service. Below is a table from the above mentioned A16Z blog post differentiating the two: 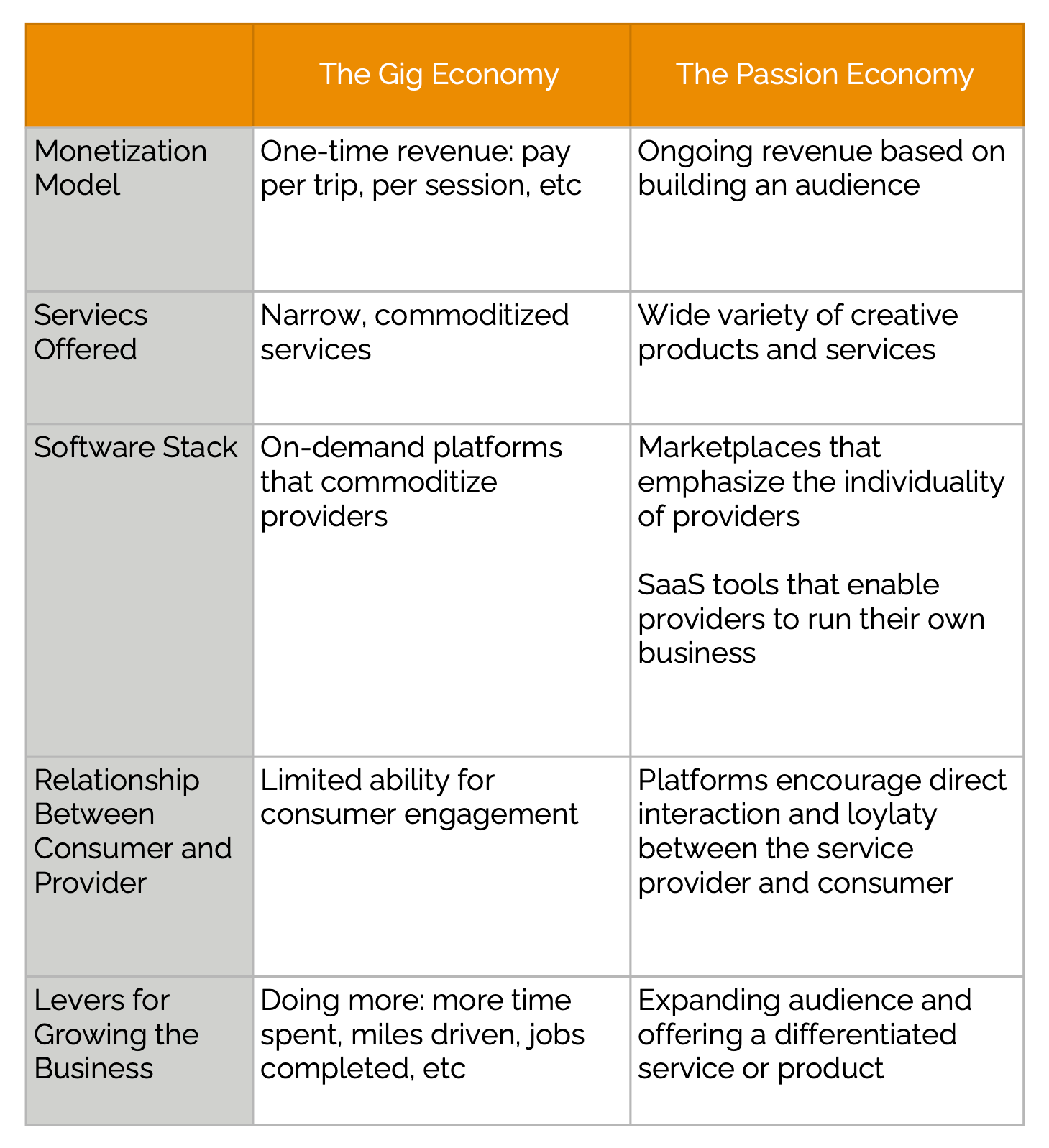 From my perspective, I do not think the Future of Work will offer a binary choice, between the "Passion Economy" and the "Gig Economy". In particular, I think that while people do like the autonomy offered by being a part of the "Passion Economy", you practically need to be a solo entrepreneur to be successful in the Passion Economy. To be successful in the way Kevin or Li describes, can often involve a not insignificant, multi-year ramp-up period. Like with any other kind of entrepreneurship, solo entrepreneurship is hard and isn't for everyone - at least not yet.

So what alternatives are there to the Gig Economy and the Passion Economy? Well the most obvious still remains full-time employment at an organization. However as the Information Age has progressed, two things have happened:

We now live in a world that was described by Michael Malone, in his 2009 book The Future Arrived Yesterday, where the multi-national behemoths of the Industrial Age are being replaced by Protean Corporations of the Information age. Protean corporations - more commonly known as startups - are described as shapeshifting and are characterized by a relatively small core group of people coming together to build a company. This core group of people work together for say a period of 5-6 years building a company, let's call it a startup, pivots as needed (shapeshifting within the same org), scale it up to a certain point, exits, and moves on to their next (ad)venture (shapeshifting to a new org). The closest analogy to this form of an organization up to this point in time, albeit generally for even shorter periods of time, are film or show crews that make a movie or multi-year show together. What is more important for the purpose of this post though, is not the core group itself, but the much larger pool of flex talent (see image below), that the core group plugs into. 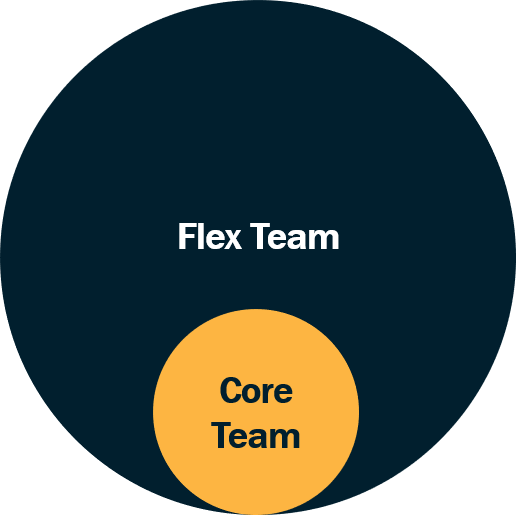 Are these individuals then a part of the "Passion Economy"? Not quite. They might, in that what they work on day to day might very well be what they are most passionate about - however, it doesn't have to be. For example, not every developer I know is consumed by code. Some are, but most of them view their work as their profession, not necessarily their life's calling. They take up software development as a profession because it offers them a path forward to a more balanced and fulfilling life in general. More importantly, though, they are not like solo entrepreneurs. They are not for example constantly working on creating or distributing new content. They are not producing scalable output (for themselves at least) in the same way as someone on Substack or Teachable is - at least not yet.

From my perspective, I wouldn't term these resources as gig workers, passion workers, or as traditional full-time employees, but as "flex talent." Similarly, the companies that serve them (like Archimydes), I would call flex companies and the economy that constitutes this workforce as the "Flex Economy."

I also believe that particularly with the rise of remote work, asynchronous work processes will come to the forefront, enabling more efficient distribution of work both from the point of view of the company and talent. This will create a very large impetus towards the "Elex Economy" in which arguably more people will participate in than either the "Gig Economy" or the "Passion Economy". Below is an updated table that will characterize work in the "Flex Economy":

I expect flex work, particularly as it relates to software development, to replace full-time work as the dominant form of employment in the not too distant future. Flex talent will maintain anywhere from between a half a dozen to a dozen "projects" with different clients throughout the year. This will open up multiple revenue streams, with much greater autonomy than afforded in full-time work, and a larger take home. While this might not be the utopia of pure passion-based work, it is a huge step forward from the extremely fragile, industrial-age full-time work model. Additionally, it will embolden those that have hitherto held back from pursuing their passions because of the fear of losing a paycheck to do so with a safety net in place. As anyone that has pursued work in the Passion Economy will attest to even getting to 100 paying true-true fans paying a $1000 a year, can take several years!